John Foxe on Antichrist Exalting Himself in the Temple of God

Most of us have heard of Foxe's Book of Martyrs. What many are not aware of is that this is an extremely edited version of his original work, which is entitled The Acts and Monuments of the Church, Containing the History and Sufferings of the Martyrs. The entire work runs over 7,000 pages, contained in 8 volumes. "The Book of Martyrs" that most people are familiar with is a 300+ page paperback that focuses largely on the martyrs of the first 300 years of Church history. Foxe arranges his material around his interpretation of the Millennium of Revelation 20. Perhaps in later posts, I will provide Foxe's detailed exegetical analysis of this passage of Scripture. But for now, suffice it to say that Foxe sees the Millennium as the 1,000 year period in which there was no official, state-sanctioned persecution of the Church. This extends from the Edict of Milan. From this period, there was no state-sanctioned persecution of Christians. During the intervening one thousand years, pagan Rome was destroyed and its power fully transferred to Papal Rome. A thousand years after the cessation of persecution of Christians, Rome, now ruled by the Pope, reinstituted the persecution of Christians when she aimed her fury at Wycliffe.

Central to Foxe's position, is that the papacy is the Antichrist. This view has waned among Protestants, even among supposed Reformed Christians, over the past century and a half, but it was without a doubt a central tenet of the Reformation. In fact, whatever doctrinal differences there may have been among the various "schools" or strands of the Reformation (Zwingli, Luther, Calvin, Cranmer, Knox, etc), there was 100% agreement among them about this: The Papacy, and therefore every currently-reigning Pope is the Antichrist. I am bold enough to say every single Reformer would have made this a test of one's claim to the true Christian faith. Nor is it fair to say that this belief was pure reaction on their part against a persecuting power. Centuries before Wycliffe ever made the charge, sprinkled throughout Church history, other writers, not persecuted, have made the same claim. And all have done so based on careful, precise, exegesis of relevant passages of Scripture.

When one hears Protestants assert that the Pope is the Antichrist, and that he had historically made extravagant claims for and about himself and his position, it might seem like a stretch or an exaggeration. What follows are the final 18 1/2 pages of Book VI of The Acts and Monuments, which are pages 145-164 of Volume 4 in the 1846 edition. Foxe presents what is essentially a catena, or chain of papal edicts, decrees, epistles, etc., in which the assertion that the Pope exalts himself in the temple of God is proven - straight from the horse's mouth. Clicking on an image will open it to view more clearly. I highly recommend reading all 18 1/2 pages. 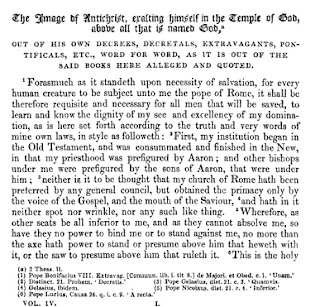 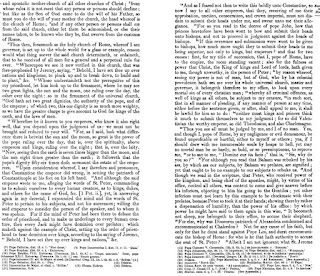 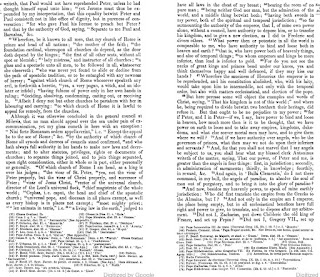 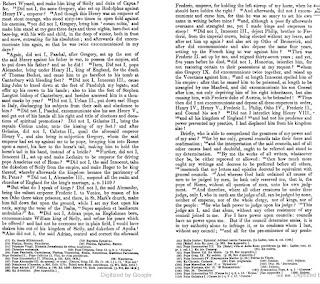 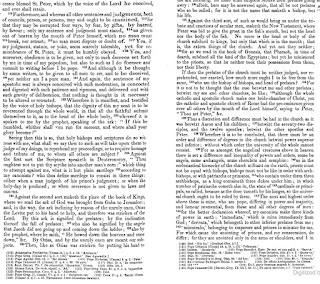 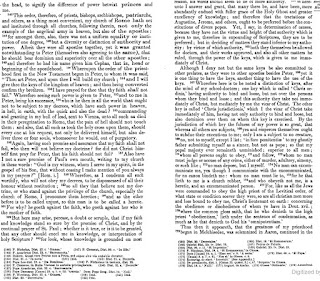 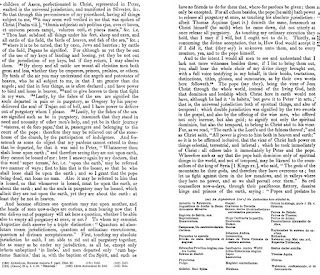 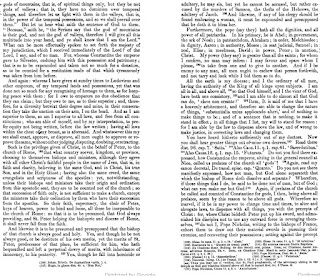 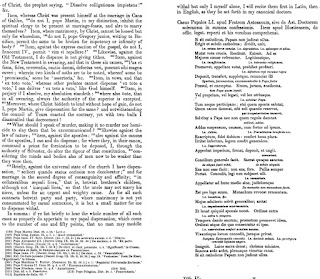 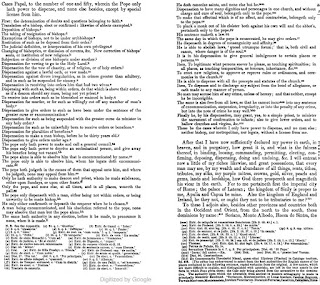 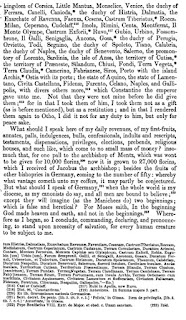