Dabney: We Can Be Glad Atheism Is Inconsistent With Its Own Principles 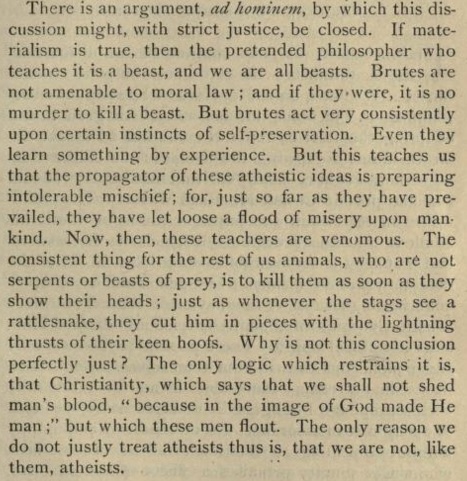 From, R.L. Dabney, The Sensualistic Philosophy of the Nineteenth Century, Considered - Chapter 9
Posted by Andy at 7:00 AM No comments:

“They ask us: 'Since blind chance may, amidst the infinite multitude of its experiments, happen upon any results whatsoever, why may it not at times happen upon some results wearing these appearances of orderly adaptation?' I answer: the question puts the case falsely. Sometimes? No. Always. The fact to be accounted for is, that Nature's results have always an orderly adaptation. The question we retort, then, takes this crushing form: How is it that in every one of Nature's results, in every organ of every organized creature, which is known in living or fossil Natural History, if the structure is comprehended by us, we see the orderly adaptation? Where are Nature's failures? Where the vast remains of that infinite mass of her haphazard, aimless, orderless efforts? On the evolution theory, they should be myriads of times as numerous as those structures which received some successful adaptation. Let us recur to the illustration of the Frenchman employing an eternity in throwing a basket of printer's type abroad blindly, until, after perhaps an infinite number of throws, he happened to get precisely that collocation which composed the martial poems of Ennius. Why might it not happen like at last? Suppose, I reply, that the condition of his experiments were this: that he should throw a different basket in each trial, and that a considerable part of all the types thrown in vain should remain heaped around him; then, he and his experiments would have been buried a thousand times over beneath the rubbish of his failures long before the lucky throw were reached. But this is the correct statement of the illustration. The simple making of this statement explodes the whole plausibility, leaving nothing but a bald absurdity. For, as has been already stated, Evolution must admit the teachings of Paleontology. But the later asserts that the organized beings of vast ages still exist, in the form of fossils. Now, will the Evolutionist pretend that the durable remains of the hurtful variations were less likely to continue in the strata than those of the naturally selected? Not one whit. Then, there should be, on his supposition, as large a portion of the printer's types from every unsuccessful 'throw' left for our inspection as from the sole successful one. Where are they?”

R.L. Dabney, The Sensualistic Philosophy of the Nineteenth Century Considered, Chapter 9
Posted by Andy at 7:00 AM No comments:

A Critique of Evolutionism

“Here, then, is the fatal chasm in the materialistic scheme. Not only does it overlook the essential difference between inorganic and vital causes; it is guilty of the absurdity of ascribing to the blind, unintelligent forces of protoplasm, more thought, choice, and wisdom, than all the philosophers in the whole world will ever attain unto. When we rise to the crown of the series of living creatures in man, the absurdity culminates in the highest conceivable extravagance; for there we see a being not only displaying the highest thought about him, but also containing thought in him.

“Let us look, now, at the part of this structure contributed by Mr. Darwin. We object, first, that the favorite law of 'natural selection' involves in its very name, a sophistical idea. Selection is an attribute of free-agency, and implies intelligent choice. But the 'Nature”' of the evolutionist is unintelligent. She acts by haphazard. To apply the idea of selection to such fortuity is but a metaphor, not science. Dr. Darwin, perhaps, seeing this fatal objection, thankfully accepts from H. Spenser what he deems the more accurate phrase, 'survival of the fittest.” But we still have the same absurdity insinuated under a metaphor. Fitness also implies design! Fitness is an adjustment. That the physical interaction between the environment and organism should regularly result in this adjustment, while totally blind, is a supposition wild enough. But a multitude of cases might be found where the notion becomes impossible, because the fitness existing is not between the being and its ordinary environment, but between it and some other being which it rarely meets, or never meets once in its existence. …

“Paleontologists (to whom the evolutionists, of all men, are bound to adhere,) hold that the great masses of these fossils actually remain, many of them of almost incredible age. But they all represent established genera. Where are the fossils of the transitional and intermediate links, which ought to be a myriad times more numerous? Were evolutionism true, 'the world could not contain them.' Again: fossil natural history should present us with both sides of the history of the blind process of this natural selection, with the fossils of the degraded, the unfit, as well as with those of the developed species. How is it that Mr. Darwin only dwells upon the latter? Especially as the downhill slide of the history ought to be ten thousand times the fullest. But did the fossils present us with such a history, then how preposterous would it be to call the course of nature an 'evolution,' when nature's decadences would almost infinitely outnumber her advancements? The evolution theory is also inconsistent with the wide diffusion of some of the highest species of animals. Man is the highest and most complicated result of this supposed process. Now it is natural to suppose that the local conditions, or environment, necessary for evolving this most complicated result, would be more rarely found. But man is found more widely diffused over the globe, and multiplying his species under more diverse climates and condition, than any other animal. This is inconsistent with the result to be expected upon that scheme.”


R.L. Dabney, The Sensualistic Philosophy of the Nineteenth Century Considered, Chapter 9
Posted by Andy at 7:00 AM No comments:

“In respect to this point (viz., Divine Foreknowledge, aku), the Socinian is more logical than the Arminian. Both agree that God does not decree those events which result from the action of the human will. Voluntary acts are not predetermined, but depend solely upon human will. Whether they shall occur rests ultimately upon man's decision, not upon God's. Hence human volitions are uncertainties for God, in the same way that an event which does not depend u[on a man's decision is an uncertainty for him. The inference which the Socinian drew from this was, that foreknowledge of such events as human volitions is impossible to God. God cannot foreknow a thing that may or may not be a thing; an event that may or may not be an event. The Arminian, shrinking from this limitation of the divine omniscience, asserts that God can foreknow an uncertainty; that is, that he can have foreknowledge, without fore-ordination. But in this case, there is in reality nothing to be foreknown; there is no object of foreknowledge. If the question be asked, What does God foreknow? and the answer be, that he foreknows that a particular volition will be a holy one; the reply is, that so far as the Divine decree is concerned, the volition may prove to be a sinful one. In this case, God's foreknowledge is a conjecture only, not knowledge. It is like a man's guess. If, on the contrary, the answer be, that God foreknows that the volition will be a sinful one, the reply is, that it may prove to be a holy one. In this case, also, God's foreknowledge is only a conjecture. To know, or to foreknow, an uncertainty, is a solecism. For in order to either knowledge or foreknowledge, there must be only one actual thing to be known or foreknown but in the supposed case of contingency and uncertainty, there are two possible things, either of which may turn out to be an object of knowledge, but neither of which is the one certain and definite object required. There is, therefore, nothing knowable in the case. To know, or foreknow an uncertainty, is to know or foreknow a non-entity. If it be objected, that since God, as eternal, decrees all things simultaneously, and consequently there is really no fore-ordination for him, it is still true that in the logical order an event must be a certainty before it can be known as such.”